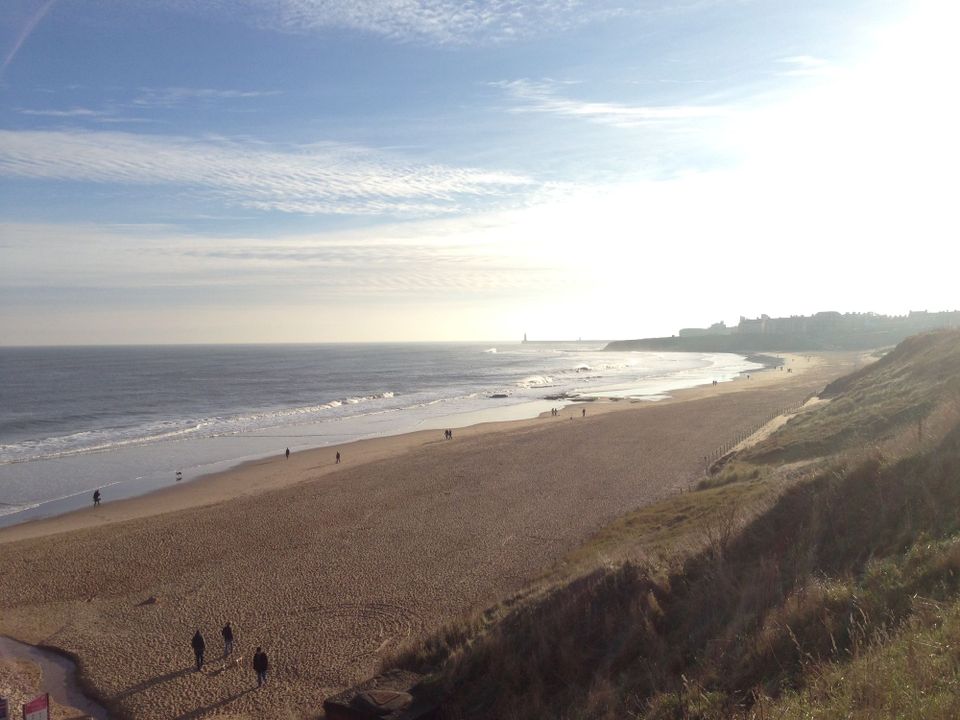 5 ways to survive long enough to ride the wave

There is nothing like the feeling of swimming in deep seawater. The constant movement, the changing temperatures around your body, and the knowledge that you are but a tiny object at the mercy of the ocean.

It is humbling, exhausting and exhilarating all at once - a bit like leading your own organisation.

Like life, when you're surfing a wave, it seems like nothing could ever go wrong, that the world is holding and supporting you, and doing great things seems almost effortless.

But when the wind gets up and the sea gets choppy, even the simplest things can feel almost impossible.

Work was feeling incredibly tough. Our company was growing, getting busier and busier, but our numbers were going backwards despite everything.

I burned out, and my amazing wife sent me to stay with my mum in Tynemouth.

Luckily, as well as being my lovely mum, Jan Etoile is an incredible life coach, who specialises in supporting leaders through times of crisis.

Jan helped me to rest, and then put me back together.

As I recovered, I spent a lot of that week in Tynemouth walking on the beach and watching the surfers.

It was fascinating to see just how much of their time was spent doing a lot of nothing.

Many of them would be chatting, hanging on to their boards as wave after wave sailed past.  They would often look like they were about to jump onto their boards, but then pull out at the last minute.

When they eventually chose a wave to surf, I'd watch them paddle vigorously to get up to the perfect speed to catch the wave.

Often they would fail, and paddle back to their mark. But now and then, a surfer would get it just right.

I'd watch them carve and pump their board, turning this way and that as the wave drove them ever closer to the shore.

As I sat quietly on a bench overlooking the break, watching the guys all doing their thing, I realised that everything would turn out OK.

The truth is that running a business is like surfing.  It's a lot about turning up consistently, making choices about what to try,  carefully timing your efforts and learning from your mistakes.

And the variable surf conditions are a bit like the business marketplace.

Sometimes, the right wave just doesn't come along for ages. Often, there are just no waves to ride at all. And some waves can turn you upside down in a flash.

But - and this is important - as long as you make it back to shore, you live to surf another day.

When you are growing a business, you are subject to the demands of your marketplace.  Like the ocean, it's pretty much out of your control.

No matter what you want to happen quickly, in business, the market has to want what you have decided to provide.

If you want to succeed, you must go with the flow, and adapt to the conditions.

As a surfer, when you're starting out, you will invariably make quite a few mistakes.

You'll try to surf waves that are too small, which won't support your weight.

You'll set off to catch waves too early, meaning they crash over you.

You'll set off too late, and miss the wave entirely.

And the uncontrollable nature of the marketplace can feel just as scary as swimming in choppy waters.

So, how can we ever become successful entrepreneurs if we are at the mercy of the marketplace?

Well, we must accept the challenges thrown at us, and ensure we give ourselves the best chances of surviving, and then thriving.

And the one thing that really helps us win big? It's the amount of time we can keep going before the big breakthrough finally arrives.

Running a startup is like being the test pilot of a brand new aircraft. You sit in the carcass of a plane and fire up the engines on day one - heading down the runway before you have built the wings.

You don't know how it's likely to fly, so you work super hard to give yourself the best chance of a successful takeoff.

And the longer your runway, the more time you have to adapt the aircraft for your plane to eventually take off.

If you run out of runway, you can't ever get into the air.

This is just like starting a company - if you can keep doing your thing, changing and adapting for long enough, you will eventually find success.

And most of the time, the killer breakthrough takes a lot longer than we'd like.

Look at Netflix. Ask a friend when they think Netflix was incorporated.  Not many people would say 1997. Their first original series came along with House of Cards - 14 years later - in 2011.

Or Pixar - which got its start in 1974.  It was spun out of Lucasfilm by Steve Jobs in 1986. They didn't even start releasing animated movies until Toy Story in 1995. They eventually sold to Disney in 2006, 32 years after the project was first born.

I started my company, Barcroft Media, in 2003. We grew slowly, without taking any external investment until Channel 4 bought into our company in 2016.

We started as a news photography assignments agency.
But we soon had to pivot into a photographic syndication agency.
Then into a news agency.
And we got into video footage licensing.
Next was documentary production.
We moved into branded content.
Then we started making original social video.

It was this seventh iteration of Barcroft Media that finally provided the growth, scalability and profit we needed to break through.

And the rest is history.

Many things helped us survive long enough to hit that sweet spot.

MULTIPLE REVENUE STREAMS: Each time we tried something new, we kept delivering the parts of the existing business which made money. So, when a new project was successful, the new revenue was additional to existing income. When a new product didn't work, we killed it quickly. Multiple ways of making money also meant that if an existing product failed, we had other cheques rolling in, so we could adapt our cost base, and use money from several products to keep the bills paid.

MINIMUM VIABLE PRODUCT: When we decided to do something new, we went MVP. We delivered the good-enough version of the show or channel, as quickly as possible, for as little money and internal investment as possible. We invested our brains into new stuff, not our cash.

GROWTH MINDSET: Our company thrived on the idea of positive growth. We loved trying to improve what we were doing. We ran competitions to come up with new ideas. We constantly explored new opportunities to do more. We reinvested all our income into growth-focused projects for over a decade. This created a culture where fresh success was highly prized, and failures were great teaching points.  This meant that the team were in great shape to jump onto whichever waves we decided to ride.

STAYING HONEST: We were really honest with each other about where we were financially. We always ensured we had the cash to pay our people come what may - be they staff, freelance or suppliers. If we didn't have the money to innovate and pay the bills, we went and found the money BEFORE we spent it.  This gave us the emotional security to really go for it.

It took a long time to turn these instincts into strategies and repeatable tactics. But they became a cornerstone of our culture.

So here are five ways you can ensure you survive long enough to enjoy spectacular success:

It is incredibly challenging to run a new business.  The first 1,000 days are possibly the toughest marathon of your life.

I eventually found out why our numbers weren't right - one of our employees had been stealing our money. That's a whole other story.

But like life, things pass. And the most important lesson for me so far?